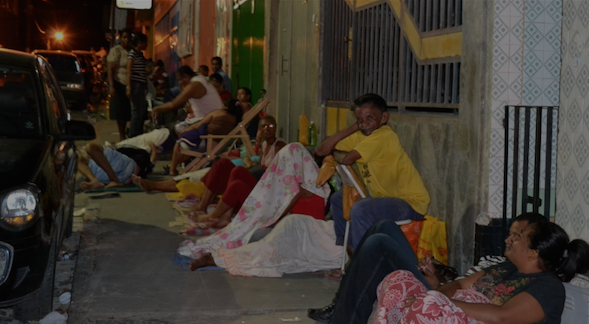 12. Waiting in the Face of Bare Life

¶ 1 Leave a comment on paragraph 1 0 Welcome. Please read the instructions for reviewing before commenting. We ask contributors to be generous when thinking along with our pieces and to keep in mind that the final chapters are intended to be short essays. Visit matteringpress.org for more information on its other books. Readers might also want to have a look at this resource created by one of the book’s editors, Emily Yates-Doerr, which catalogues key Open Access anthropology publications.

¶ 2 Leave a comment on paragraph 2 0 By Aaron Ansell

¶ 3 Leave a comment on paragraph 3 2 Advocates of a more robust democratic citizenship in Brazil often point bitterly to the frequent practice of cutting ahead of others in line. Such line-cutting, they lament, indicates a popular attachment to hierarchy and a disregard of one’s fellow citizens. Democratic citizenship, so this line of thought goes, inheres in one’s respect for the stranger’s time, body and life-world, a far cry from the degradation of poor people’s personhood within Brazil’s anonymous, metropolitan spaces (Caldeira 2000: 367-377). Waiting for services is thus “a privileged site for studying performances of citizenship” because it reveals popular dispositions toward the generic citizen’s rights and vulnerabilities (Holston 2008: 15).

¶ 4 Leave a comment on paragraph 4 1 I want to consider the possibility that waiting one’s turn in line, what we might call waiting democratically, brings with it the threat of disarticulation from those social relations that give value to particular lives. Reflecting on Brazilians’ invocations and subversions of egalitarian waiting opens a window into a mode of suffering that liberal institutions sometimes elicit, especially in a context of austerity. In what Javier Auyero calls the “patient model” of governance, the neoliberal state imposes long waits and thus “manipulates poor people’s time” to produce their docility (Auyero 2012: 157). Here I suggest that poor people who inhabit democracy face another form of suffering, one associated with the threat of being reduced to bare life as they anticipate the materialization of their rights.

¶ 5 Leave a comment on paragraph 5 0 The incident I take for my ethnographic case occurred in March of 2015 in the northeastern state of Piauí. There I witnessed an argument between two people waiting in line for curative consultation with a local spirit medium.

¶ 6 Leave a comment on paragraph 6 0 One party to the argument was “Dora,” a retired janitor in her late fifties, who had been suffering from knee pain for months. Dora frequently complained that she lacked the money for private doctors. She had debated accessing free services through Brazil’s “Unified Health System” (Sistema Única da Saúde, or SUS), but was wary. SUS healthcare is hampered by insufficient state investment throughout Brazil, especially in the rural Northeast. The one public hospital in Dora’s town was chronically understaffed by medical personnel, many of whom routinely ditched their posts to attend to wealthier patients in their private clinics. I had overheard Dora and her friends complaining about waiting in line for multiple days in the hot sun outside the public hospital. When she did go to that hospital, she returned complaining that the wait was insufferably long, that the visit “Didn’t do anything [for me],” and that “the doctor just looked at me quick and said to take [a non-prescription pain killer].”

¶ 7 Leave a comment on paragraph 7 0 I was glad to drive Dora to the remote home of a spiritual medium, “Medium João,” that March day. When we got there, we had to wait for two hours on the front porch behind a young man in his twenties, but the waiting area itself was quite congenial. It was a sort of garden with comfortable benches, palm trees for shade, and a pitcher of ice-water. Alongside these comforts was an ornate shrine to St. Sebastian, who is often syncretized with the African deity, Oxôssi, guardian of herbalists and physicians against evil spirits. The waiting area was also bedecked with peppers, cow horns, and other protections against the malignant power of envy (the evil eye). As she approached the house, Dora briefly greeted the young man who had been waiting there, and he smiled back. Then he grew agitated when she walked right by him, knocked on the door, and presented the lady of the house with four liters of fresh milk to give to medium João. After João’s wife disappeared into the house, the young man protested to Dora that he had been waiting for some time. She responded,

¶ 9 Leave a comment on paragraph 9 0 Still upset, the young man stopped talking and João’s wife soon called him in for his consult. Though he attended to the young man first, the medium gave him only a fraction of the time that he would later spend with Dora.

¶ 10 Leave a comment on paragraph 10 0 But let me dwell on Dora’s words. Her concluding phrase, “There’s none of that stuff,” begs the question, What stuff? The phrase refers to the norm of egalitarianism that the young man invokes when he implicitly accuses Dora of trying to cut ahead of him in line. Consider that the earlier statements of Dora’s response sketch several, partially overlapping arguments that defend her choice to bypass the young man on her approach to the door. The first phrase suggests that she was there to carry out a personal exchange relationship with the healer, rather than wait for his services. The second is a normative claim that charismatic healers (most of whom are men) enjoy the prerogative to see people in whatever order suits them. The third is a descriptive claim that she has a personal relationship to the healer (troped as siblinghood) that both legitimates her gift of milk and preemptively justifies to the man why he might find himself passed over.

¶ 11 Leave a comment on paragraph 11 0 Sociable exchange, the healer’s prerogative, and personal affinity — Dora was mobilizing the forms of agency and value proper to patron-client relationships in order to frame the social space. And to me it seemed that Medium João’s waiting area itself corroborated Dora’s framing — with its material comforts, warm hostess, and its invitations to spiritual humility (supplication before the saint and caution with one’s own evil).

¶ 12 Leave a comment on paragraph 12 0 The logic of Dora’s “active waiting” (see Han 2012: 31) contrasts sharply with that of the public hospital waiting room, and this contrast illuminates the mode of suffering that Dora and others experience when accessing public healthcare. It’s not just the long hours and uncomfortable conditions of hospital waiting rooms that bother Brazilians like Dora who seek public healthcare; it’s also the feeling (uttered by another consultant) that waiting for SUS “is like being dead.” I read this feeling in light of the centrality of the reciprocal networks of care and favor that produce each person’s social particularity and value (not unlike Strathern’s “dividual”). Patients waiting for SUS services sometimes try to mobilize these networks to gain faster service: they ask local politicians to place phone calls to the hospital on their behalf, and they approach the staff with personal, sympathy-inducing stories that support their appeals for a jeitinho (the colloquial term for a suspension of the rules, literally “a little way”). But through the optics of liberal bureaucracy, these practices appear as selfish and atavistic. Several front desk workers at the local public hospital told me that they routinely rejected such efforts. Perhaps it is they, more than the doctors or administrators, who enforce an ethic of formal equality in the waiting room.

¶ 13 Leave a comment on paragraph 13 3 Left to wait just like the stranger next to them, Dora and others experience the wait for public healthcare as a threat to the social articulations that organize their lives. I interpret this deracinated form of waiting as a variant of bare life à propos of Giorgio Agamben (1998). Agamben claims that “modern democracy presents itself from the beginning as a vindication and liberation of zoe” (bare life) (1995: 9). It’s strange then that he develops his discussion of modernity in relation to spaces of abject exception (“the camp”) that indict bare life. The hospital waiting room serves as a better locus to witness bare life’s vindication because its dominant logic treats the human body as the thing to which rights become attached. As a liberal space, the hospital waiting room’s logic strips people of their particular form of life (bios), transforming them into equally-dimensioned, empty vessels into which can be poured an equal amount of rights. While those waiting may continually reassert new social articulations in the face of this deracinating power (see Biehl 2005: 318; Han 2012: 88-89), they nonetheless experience it as a threatening potentiality.

¶ 14 Leave a comment on paragraph 14 1 Dora’s quarrel at Medium João’s private home makes sense in light of her refusal to be interpellated as a deracinated (if equal) subject by a state that would keep her waiting far too long for poor medical care.

¶ 15 Leave a comment on paragraph 15 0 Aaron Ansell is a cultural anthropologist who specializes in Brazilian state formation, patron-client politics, social policy, and rural community life. His ethnographic writings employ methods from linguistic anthropology to analyze emerging expressions of democratic subjectivity and counter-democratic reactivity. He is currently Assistant Professor of Religion and Culture at Virginia Tech.

Login to leave a comment on the whole Page

Recent Comments on this Page

Recent Comments in this Document